Frolicking, my new favorite word (for the last month or so anyway)

New plan, since clearly I have problems writing everyday, at the moment at least (although I do spend time thinking everyday. Maybe the problem is I like the company of my own thoughts rather than the satisfaction of seeing my thoughts in writing). But, I’m going to start every blog post by acknowledging things that I’ve done wrong/badly since the last post. Not because it is particularly fun. But, practice what you preach and all that jazz. So these may not be strictly failures every time, but are definitely areas for improvement.

1) Big boo-boo. Totally forgot to call my parents on their anniversary yesterday. In my defense, I have no idea what today’s date is. But that’s not really a defense, and I messed that up royally badly. Sorry mom and dad. Congrats on far more years than you care to admit I’m sure (But 29 for everyone who doesn’t know).

2) I went to lunch with a friend today. And on my way out stepped on a bird. And killed it. That was by far my lowlight of my day, (until my dad called to say that failing is fine, but failing to call your parents on their anniversary is not).

But, on to happier topics!

Monday I piloted a plane (yep, and survived!) and went zip-lining (both through Living Social deals, yes, I might have an addiction to Living Social and Groupon, but it is a controlled addiction, I think, I hope???).

Lessons learned? Flying a plane is surprisingly easy. No, really. At least one of the little ones anyway (I flew a Cesna four-seater). On the ground, you use two pedals to go right and left and brake. In the air, it is like driving, but in three dimensions. It was a wee bit bumpy, but it was a lot of fun. Granted, I didn’t have to do anything with the throttle (my instructor handled that). But flew 95% of the time! Including two take-offs and two-landings. W00t!

Went zip lining after that. Actually set the course record for getting done the fastest. 😛 13 minutes. Granted, I was the only person in the group, since the other people got scared off by the potential of rain.

Tuesday was another fun day. Meetings during the day. Had lunch with a friend and his 5 year old son. The son told his dad with a completely straight face that he was far too young to have an opinion of which girls were hot. Went to the Carolina Railhawks game that night. The ride over was adventuresome. Some highlights (or lowlights) of the other passengers in the car:
1 had been bitten by a brown recluse on Friday, had surgery on the bite Tuesday, and was drugged up and limping on codeine.
Another had poison ivy on his penis (you could read that again, but do you really want to?).
Fortunately there was one relatively normal person in the car besides myself. Needless to say, the conversations in the car were interesting to say the least. But the game was great! 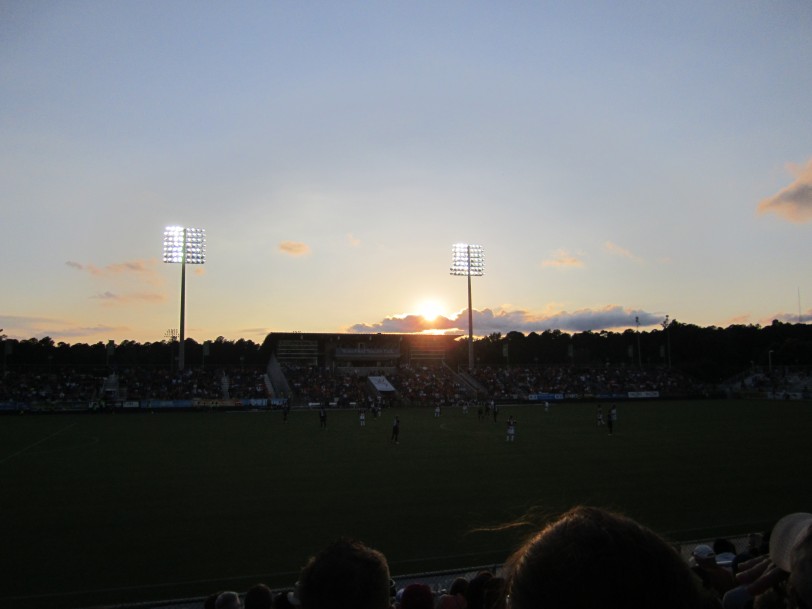 Cookout on the way home, along with a running commentary of the recent history of Cary. And then, I went to my first ever country night at East End. I’m kind of glad it was my last as well.

Today, well, now technically yesterday, much time spent with friends. And laundry. This packing and cleaning business has to be done before Saturday. Yikes.  Tomorrow (or rather later today) will have a better post. About transitions. If I get around to it. This writing business is hard!

5 thoughts on “Frolicking, my new favorite word (for the last month or so anyway)”