Went to Nacho Daddy for the first time on Tuesday. I went to their new Downtown location (I’d never been to their Henderson location). It was kind of crazy to see how much progress had been made in less than two months. I had toured the space back in August when their floor was still dirt and they were still working on major construction. Needless to say, there had been a lot of progress since then. The Downtown location is on 4th Street, just past the Fremont Street intersection. Looking at their menu online, it looks like their Downtown offerings aren’t as numerous (yet) and are slightly cheaper. 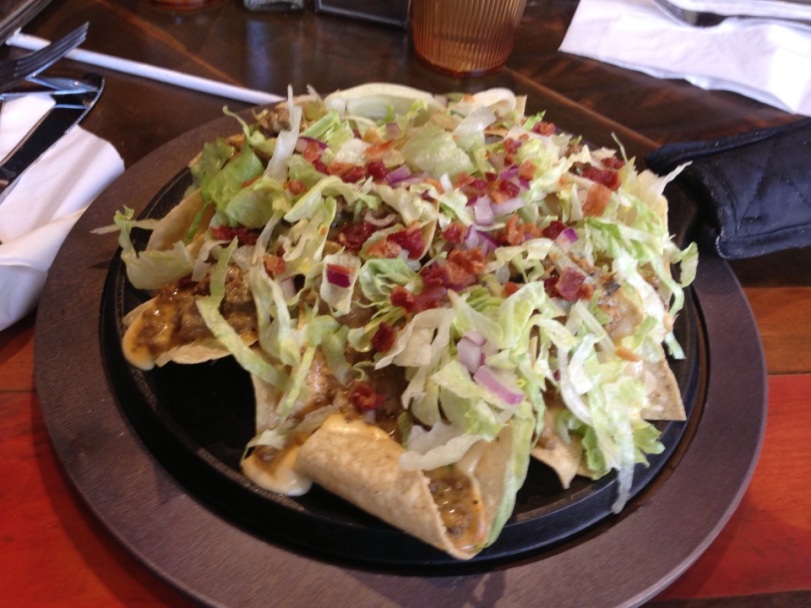 The nachos came on home made corn chips topped with ground beef, queso, lettuce, red onions, and bacon (I got mine sans tomatoes because I despise tomatoes). Honestly I had gone in with no expectations, but was pleasantly surprised. I had stuck to one of the more traditional offerings since I was having bbq for dinner that night, but plan on going back to see what else they have to offer. Portions were big, enough that I finished the meal, but wasn’t stuffed. Probably the right balance since nachos aren’t the best food to take home as leftovers. Price was right too. $11 including tip.
Rating- 4/5 Food was good. Service wasn’t there yet (but it did just open).
Price range – Cheap/Medium. Another one of those places that is right on the middleground between cheap and medium. But then again, not too many places are going to be cheap and good.
Location – Downtown, Fourth and Fremont.
Recommendation – Worth seeing. I see it being a great place for late night drunk food (perfect for its location close to Fremont).
Advertisement