I’m going to preface this review by saying that it would be impossible for me to be objective about this particular restaurant. I’ve probably gone to eat at eat about once a week since it first opened almost a year ago. It was one of the first small businesses funded by the Downtown Project to open. I walk by it every day on my way to or from work. I was at their first pop up dinner. I know most of the staff by name and Natalie genuinely gets angry at me if I go in and don’t say hello and goodbye. All of that being said, I still think all of my reviews about this place are objectively true. And judging by the number of awards the place has gotten since its opening, I don’t think I’m too biased.

The location certainly isn’t a location where one would expect to find an award winning restaurant. On the corner of 7th and Carson, when eat first opened, it was away from the hustle and bustle of Downtown proper, whose reach really only went to Fremont and 6th street. Street parking is the only parking available, and if you don’t know where to look, your eyes can easily pass over it as being part of the ground floor of the apartment complex. Though it may not be impressive from the outside, the inside has a completely different feel, modern yet simple with naked light bulbs hanging from the ceiling, a divider made of barn wood, a cozy waiting area that is often overflowing at lunchtime during the week and pretty much all hours of the weekend. The community table in the middle, the counter, and the patio (an addition made after opening) are my favorite spots, with the counter being my top choice, letting you see into the kitchen where a small staff is constantly at work to put out some delicious food. 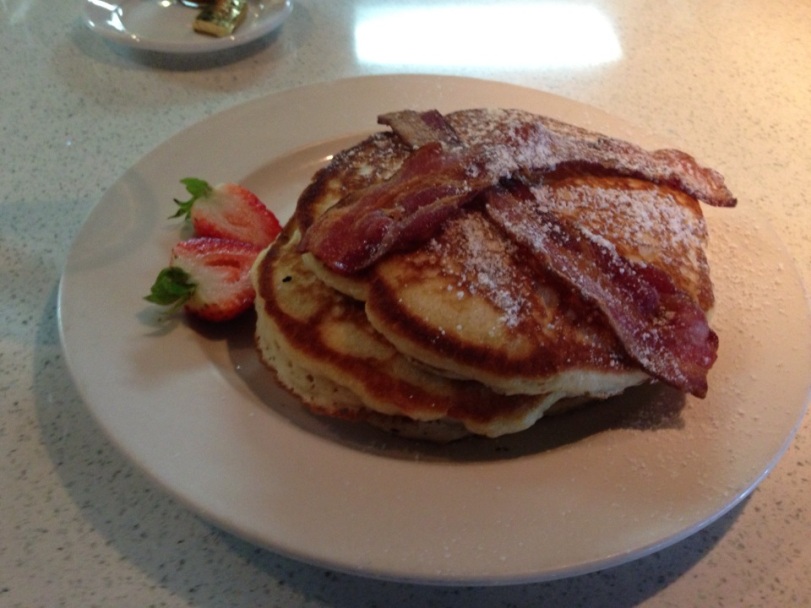 This morning I got the pancakes. The place has gotten numerous awards for its pancakes, being voted best pancakes in the city, displacing Dupar’s, another Downtown staple. The order normally comes with an apple sausage, but today I asked to substitute it for bacon. The pancakes are served with individual jars of real maple syrup (the environmentalist in me always pitches a hissy fit about these) and a light dusting of powdered sugar on top. The portions are more than enough and some people can’t finish the regular order in one sitting, but it certainly isn’t because of the lack of quality. I don’t know how to describe the texture, other than the fact that they are all cooked well, with just a hint of crisp on their edges that set them apart from all the other pancakes in town. My meal this morning cost me a total of $12.00 including tax (no coffee) which puts it on the pricier side of affordable on a regular basis, but it is something I’m happy to pay for.

Rating- 5/5 Can’t say enough good things about this place.
Price range – Medium range. $10-$15 for an entree. Not cheap but not expensive.
Location – Downtown
Recommendation – Until they changed their menu a month ago, I had eaten everything on their menu. I still have yet to be disappointed.